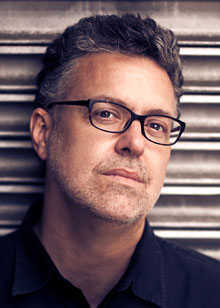 Peter Eldridge was head of the Manhattan School of Music’s jazz voice department for 18 years and is now Professor of Voice at Berklee College of Music in Boston.

For years Peter has remained at the forefront of both the singer-songwriter and jazz realms as a vocalist, pianist, composer, and arranger. He has four critically acclaimed albums: Stranger in Town, Fool No More, Decorum, and Mad Heaven. His latest studio project, Disappearing Day, was called “an out and out masterpiece” by allaboutjazz.

Some of Peter’s current projects include his first full-fledged musical with the working title of The Kiss, co-written with Chicago playwright Cheryl Coons about the life, loves, and art of Austrian painter Gustav Klimt; an upcoming recording of romantic ballads for voice, string orchestra and jazz trio entitled Somewhere, featuring pianist/arranger Kenny Werner and cellist Eugene Friesen; and Foolish Hearts, an acoustic duo featuring Peter with bassist Matt Aronoff.

Eldridge is also a founding member of the internationally acclaimed vocal group, New York Voices. The group continues to tour internationally and has performed in some of the world’s most preeminent venues and festivals and has been involved in two Grammy-award winning projects with Paquito D’Rivera and the Count Basie Orchestra.

Last Spring, Peter was commissioned by the Boston choral group Coro Allegro to write a piece for its 25th anniversary (‘to be nobody’, text by e e cummings).