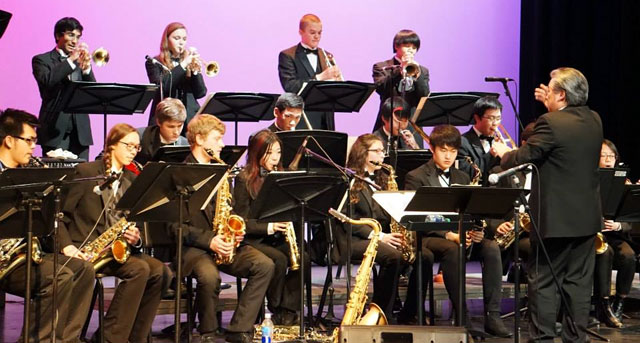 Semiahmoo Secondary’s music program has a long tradition of producing some of the best high school bands in the country. Thanks to a supportive administration and a spectacular parent organization, it shows promise of continuing this tradition for years to come.

This band has been playing together since Grade 8 and has received numerous accolades. Recently, this ensemble won best Surrey Senior Jazz Band at the 2013 Envision Jazz Festival. Andrew Skepasts, Brandon Lin and Choenden Kyirong were chosen to perform in the 2013 MusicFest, Canada Honour Jazz Band in Toronto last May and also received scholarships. At MusicFest, Andrew received a full scholarship to the Canada Youth Jazz Intensive at Humber College in Toronto while Brandon was awarded a scholarship to attend Berklee College’s Summer Music Camp. Andrew, Brandon, Choenden, and Raaj Chatterjee were selected as members of the Vancouver Jazz. Andrew and Raaj were selected to perform in the 2013 BC Music Educator’s Honour Jazz Band.

This year, the Grade 12 Jazz Band attended the Lionel Hampton Jazz Festival with 10 entries: one Jazz Band, three Combos and six soloist entries. At the festival, the Semiahmoo Duo, Andrew Skepasts and Brandon Lin (on bass) were selected to perform at the Young Artist’s Concert. Andrew and Brandon (on trombone) were also selected amongst the top soloist participants to perform in Hamp’s Club prior to the main evening concert.

The Semiahmoo Secondary Grade 12 Jazz band is honoured to perform at Rocky Mountain Music Festival and we hope everyone attending will enjoy the music they have prepared.

CONDUCTOR: KEVIN LEE
Kevin Lee, a Graduate of Western Washington University, Dick Grove School of Music and UBC, started teaching at Semiahmoo 20 years ago. Kevin has also worked at the District level as the Fine Arts Helping teacher and as a Grade 7 band teacher. Since returning to Semiahmoo last year, it has been a great pleasure to work for with his former student, Dagan Lowe.

Prior to teaching at Semiahmoo, Kevin worked as a full-time musician for over 12 years and is still an active musician working in varied musical situations. Some of Kevin’s past musical experiences have included performing on various recording sessions for albums, radio/TV commercials, movie scores, live television appearances, Much Music, as well as writing musical scores for various recording sessions and special performance occasions.