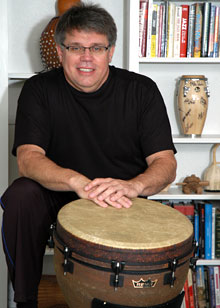 Scott Prebys is a multi-instrumental percussionist with numerous performances in the jazz, classical, pop and ethnic-music genres. He recently completed a highly successful career in higher education (37 years) and is a 2009 recipient of the North Dakota Governor’s Award for the Arts in Education.

As a director/performer, he has made two appearances at the Montreux Jazz Festival in Switzerland, recorded for the Sea Breeze label, and has served as a clinician in twenty states and four Canadian provinces.

Scott continues to serve on the faculty of the Kansas City Jazz Alliance workshops (12 years) and has directed all-state jazz ensembles in Montana, Idaho, South Dakota, and British Columbia. He recently composed and recorded the score for the film The Enchanted Highway. His performance groups have consistently received high ratings in festival competition.

Scott can be heard on weekday mornings throughout North Dakota on Prairie Public radio as host of Prebys on Classics.

He serves as a clinician for the Ludwig Drum Company and maintains a torrid performance/clinic schedule. In addition, he hosts Prebys on Music, which can be viewed on Dakota Media Access as well as on the internet.

He holds performance degrees from the University of Colorado, Indiana State University, and has attended the Eastman School of Music for post-graduate study.