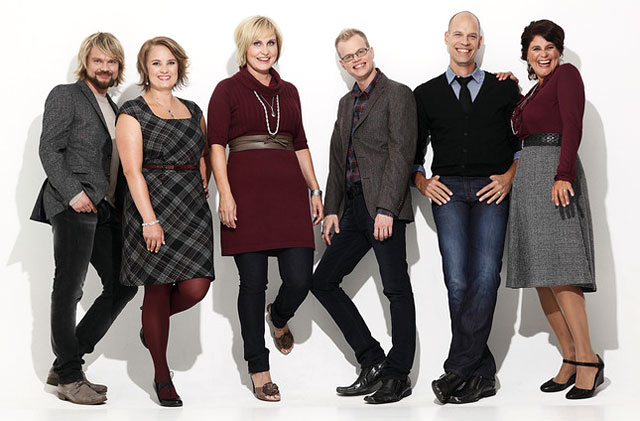 The Finnish word Rajaton translates as “boundless” – a word that so accurately describes the way this six-voice a cappella ensemble approaches music. Regularly performing around a hundred concerts and workshops each year, Rajaton exposes their audiences to the kind of diversity of repertoire, singing style, and stage presentation that has made them a phenomenon on the world stage.

Performing at concert halls, churches, jazz and choral festivals, this distinct group of musicians approaches all styles of music with the same level of commitment and integrity, making it difficult to imagine an audience that they could not inspire, or a type of music they could not make their own. In their native Finland, Rajaton is a bona fide pop phenomenon, successfully bridging the gap that often exists between classical and mainstream convention.

Rajaton has released 16 different albums. In 2017, Rajaton celebrates 20 years of music-making with one double platinum, three platinum and eight gold records in Finland under their belt, as their worldwide record sales are drawing over 400.000 copies altogether.

Ever seeking new artistic challenges, the group has grown immeasurably through collaborations with other a cappella artists, including The King’s Singers and The Real Group, as well as productions with film directors and choreographers. But it is perhaps their deep passion for choral art, their generosity of spirit and their sheer enjoyment of singing that has won the hearts and acclaim of audiences and critics everywhere. Their energy – infectious; their ability to entertain and inspire – Rajaton!

The voice is boundless.