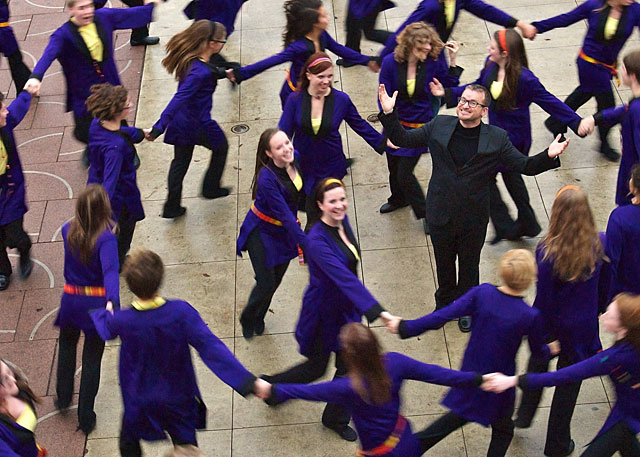 Founded in 1996, Kokopelli will embark upon its 19th season in 2014/2015. The ensemble’s members range in age from 14 to 23. The choir aims to share music across the boundaries of culture and place, using song as a tool of communication and community.

Kokopelli has been a featured ensemble at many events, provincially, nationally, and internationally. These include the Rocky Mountain National Music Festival; Podium (the biannual conference of the Association of Canadian Choral Communities); the regional conference of the American Choral Directors Association (ACDA); the International Society of Music Educators Conference, and others.

In addition to many North American cities, the choir has toured to Norway, Denmark, Sweden, Germany, Malaysia, Namibia, South Africa, Botswana, Swaziland and Zambia.  Kokopelli is often the ambassador for the choir association and as such, has received several awards for their work with youth, music education, and the African Projects Fund. In 2013 the choir was featured at the Montana International Choral Festival and in addition they participated in their third month-long tour to Africa performing with many choirs throughout South Africa and Swaziland.  They were the featured guest choir at the 2015 International Kathaumixw held in Powell River.

The current season includes plans to perform at the Rocky Mountain Festival and a mid-west tour in July that will feature a performance at the Canadian Music Educators Conference in Winnipeg.

Kokopelli is thrilled to be performing at CRMF for the 18th consecutive year and wished to thank the organizers and volunteers for their time and efforts.