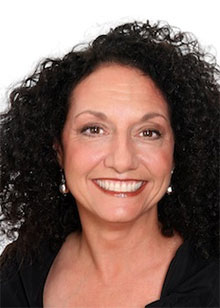 For the past 25 years Kim Nazarian has been harmonizing all over the world with the multiple Grammy Award-winning group, New York Voices (NYV).  In 2012 Ms. Nazarian was recognized as one of the top 50 most influential Armenian artists.

Along with the many recordings Kim has made with NYV, she is proud to be one of the featured voices on Bobby McFerrin’s VOCAbuLarieS CD.  Another recent professional highlight is Ms. Nazarian’s collaboration with the Smithsonian Jazz Masterworks Orchestra and the Manchester Craftman’s Guild on a concert tour dedicated to the late, great Ella Fitzgerald. Kim also enjoys being part of a special program called “Vocalese,” (created by visionary producer, Larry Rosen), which integrates NYV with Manhattan Transfer, and Jon Hendricks.

In addition to being a requested vocalist, Kim’s work as a lyricist is in rising demand. You can hear her contributions on the NYV CDs and now you can hear her other original lyrics throughout the world, including Russia, Brazil, the Netherlands (with Brazilian composer Ivan Lins and the Metropole Orchestra) and Japan.  Most notably, Kim wrote the title track to the accompanying CD of Bill Strickland’s best selling book Making the Impossible Possible.

In addition to her extensive studio credits as a movie score and jingle singer, some of Kim’s other recordings include Red Dragonfly in NY (JVC Victor) produced by Jazz Ambassador, Jiro Yoshida; Long Ago and Far Away (MCG Jazz), an original children’s radio show; and guest appearances on An Afternoon in Rio (MCG Jazz) with extraordinary guitarist Joe Negri (“Handyman” for Mr. Rogers); Two Worlds with Boston based band El Eco; and Mark Shilansky’s Join the Club.

Ms. Nazarian also specializes in teaching vocal technique and the art of ensemble singing. For the past three years she has represented the USA as a judge for the International A Cappella Competition in Graz, Austria. She will also be a guest teacher in Germany this summer, and continues her long‐standing position as an Artist in Residence at Bowling Green State University (host of the annual BGSU/NYV Vocal Jazz Camp!) Kim has conducted the New York and Arizona All State Jazz Choirs. Her highly acclaimed workshops have been presented at JEN and many state MEA conferences.

“Whether I’m singing with the Boston Pops Orchestra, the Count Basie Orchestra, or the next up and coming rhythm section, it is an honor to make my living in music. I do believe it is my mission in this particular lifetime.”