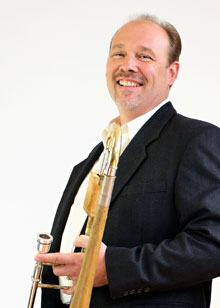 Jay Ashby is a five-time Grammy award-winning producer and has received multiple nominations in other categories, including arranging and engineering. As a trombonist and percussionist, his performance discography includes over 150 recordings, ranging in style and genre from jazz and pop, to world music.

Ashby has performed, traveled, and recorded extensively with some of the most renowned artists in the industry. As a member of Dizzy Gillespie’s United Nations Orchestra in the early ‘90s, Ashby forged relationships with jazz greats Paquito D’Rivera and Jon Faddis. As a member of Dizzy’s Alumni All-Star Big Band, Ashby had the opportunity to play next to some of the most significant figures in jazz today, including Jimmy Heath, Frank Wess, Randy Brecker, Slide Hampton, Mulgrew Miller, and Roy Hargrove. Other recording and performance credits include New York Voices, Emily Remler, Stanley Turrentine, Herbie Mann, Phil Woods, Tom Scott and Nancy Wilson.

As a result of his long-time association with trumpet master Claudio Roditi, Jay developed a strong affinity towards Brazilian Jazz. This acquired area of expertise initially led to a 10-year stint as soloist with Astrud Gilberto and continued to grow into arrangements, tours and recordings with Brazilian artists including Tania Maria, Kenia, Ivan Lins and appearances with the founding fathers of Bossa Nova, Joao Gilberto and Antonio Carlos Jobim.

In 1999 Jay Ashby began his first foray into the pop world as trombonist, percussionist and arranger with pop music icon Paul Simon. Since then, Ashby’s tenure with Simon has included world tours, the recording of a feature DVD Live from Paris, as well as performances on The Today Show, Saturday Night Live, The Late Show With David Letterman, Oprah, Good Morning America, the 2001 Grammy Awards Show, the 60th Birthday Tribute to Muhammad Ali on CBS., and The Mark Twain Awards/Lorne Michaels Recipient on PBS. Also broadcast on PBS, Ashby performed along side James Taylor, Stevie Wonder and a host of other artists honoring Paul Simon at the 2007 Gershwin Award Show. Recently, Ashby participated in the star-studded HBO broadcast from Madison Square Garden; the 25th Anniversary of The Rock and Roll Hall of Fame.

In an educational capacity, Ashby has been appointed Associate Professor of Jazz Studies at Ohio’s Oberlin Conservatory of Music. He has conducted master classes, residencies, and clinics worldwide, including annual events in Germany, Brazil, and Russia. As a Yamaha artist for many years, Jay continues to work with students of all ages, pursuing a personal mission to promote and propagate the future of jazz.