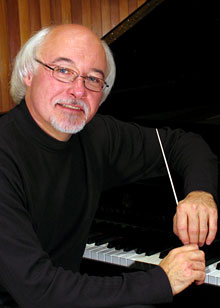 Dr. Gerald King is Professor of Music at the University of Victoria where he is Head of Music Education and the Graduate Wind Conducting program. From 2004-2012 he served as Director of the School of Music. With his leadership and guidance, the U of V School of Music was awarded the designation as Canada’s first and only All-Steinway School.

Dr. King is a former student of internationally renowned conductor Maestro Kazuyoshi Akiyama, with whom he studied the Saito Conducting Technique.

Throughout his career he has been a champion of new music, premiering over 20 compositions. As well, he has worked with over 50 major guest artists.

Although he is primarily recognized as a conductor, he has many years of performing experience as a professional clarinetist, having performed with numerous ensembles, including the La Scala Opera of Milan, Italy. In 2013 he performed with the New Edmonton Wind Sinfonia on their concert tour of Europe.

Dr. King is widely recognized as an expert for his ability to link theory and practice in the field of teaching and learning. Among his many recordings and publications is a chapter in the book Creativity and Music Education, written by 17 authors from around the world. The book includes a forward by noted author on Creativity, Mihalyi Csikszentmihalyi.

Dr. King has also completed a well-received DVD — The Craft of Conducting.

Over the past 20 years he has worked with over 10,000 ensembles and soloists representing more than 500,000 musicians. Dr. King is a Yamaha Artist Educator/Conductor.