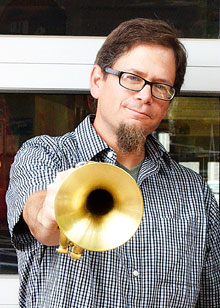 Paul is a Full Professor of Music at St. Francis Xavier University where he teaches jazz brass, jazz history, and arranging. He also co-leads the BiCoastal Collective with Grammy-winning saxophonist Aaron Lington. The ensemble is dedicated to performing new jazz compositions. Paul has released 12 recordings as a leader/co-leader on the Origin/OA2, Armored, and NohJoh labels.

Paul received his Master’s degree in Jazz Studies from University of North Texas where he was a teaching fellow in jazz improvisation, large jazz ensembles and a member of the internationally acclaimed, Grammy-nominated One O’Clock Lab Band. Paul has recently received Canada Council for the Arts grants and Nova Scotia Department of Culture Grants to compose new works.