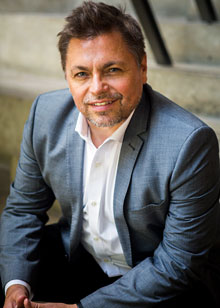 Dr. Graeme Langager is Director of Choral Activities at the University of British Columbia School of Music, and the Artistic Director of both the acclaimed Phoenix Chamber Choir and Vancouver’s newest choir, Chrysalis Vocal Ensemble.

Dr. Langager is a dynamic, engaged, and passionate educator, and a nuanced and sensitive conductor. He is sought-after as a clinician, adjudicator, and guest conductor. He has performed across North America and Europe in some of the most remarkable concert halls and cathedrals in Italy, Austria, England, Ireland, Spain, Germany, Switzerland, France, the Netherlands, New York, California, Ohio, and Arkansas.

Dr. Langager was born in Lethbridge, Alberta into a musical family, and received the Doctor of Music degree in Choral Conducting from the University of Cincinnati College-Conservatory of Music, the Master of Music degree from California State University, Long Beach, and an undergraduate degree in Jazz Studies from Capilano College.

He has taught for more than 20 years in universities and colleges in the United States and Canada, and is also active as a composer and arranger.