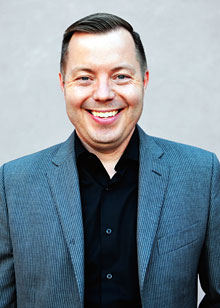 Dr. Jason Caslor is Assistant Professor of Music and Associate Director of Bands and Orchestras at Arizona State University (ASU). In addition to directing the Wind Ensemble and Philharmonia, he also mentors graduate conducting students, and teaches undergraduate and graduate conducting courses.

From 2010-2015, Caslor served as Assistant Professor of Instrumental Conducting at Memorial University in St. John’s, Newfoundland, Canada where he conducted the Wind Ensemble and oversaw the undergraduate and graduate instrumental conducting programs. Prior to that, he spent three seasons as Resident Conductor with the Thunder Bay Symphony Orchestra (TBSO). During his tenure with the TBSO, he conducted over 75 concerts (including a CBC Radio national broadcast) and recorded a full-length, internationally distributed CD with Canadian blues artist Rita Chiarelli. Recipient of an Excellence in Teaching Award from Memorial University’s Students’ Union in 2012, Caslor also spent several years teaching in the public school system as an instrumental and choral instructor.

In addition to numerous regional engagements, Caslor conducted the 2016 National Youth Band of Canada and has presented his research at the 2016 Midwest Band and Orchestra Clinic, the 2015 WASBE International Conference, and the 2013 CBDNA National Conference. Recent opportunities include conducting the 2018 South Dakota All State Band, the 2018 South Dakota Intercollegiate Band, the 2017 Alberta Wind Symphony, and the 2018 Ontario Provincial Honor Band.

Caslor’s current research interests include developing a user-friendly iPad application that will allow for the transmission of high quality audio over the internet for the purposes of internet-based rehearsals/clinics and spontaneous improvisation as it pertains to both conducting pedagogy and large ensembles.