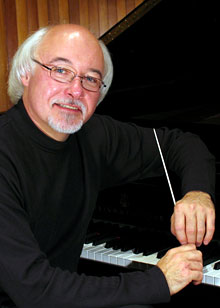 “Conductors/Teachers must be thoughtful leaders who guide each individual and ensemble to reach their own best creative potential.”

Dr. Gerald King is Professor of Music at the University of Victoria where he is the Head of Music Education, Graduate Wind Conducting, and serves as the conductor of the UVIC Wind Symphony. From 2004-2012 he served as Director of the School of Music. Among his many achievements as Director, with his leadership and guidance the University of Victoria School of Music was awarded the designation as Canada’s first and only All-Steinway School.

Internationally recognized as one of Canada’s most respected conductors, adjudicators, educators and keynote speakers, Dr. King is the recipient of numerous honors and awards, including the Order of the Phoenix by the Western International Band Clinic where he has made 7 separate conducting appearances; election into Phi Beta Mu; election into the American Bandmasters Association (2003) when he served as guest conductor of the United States Army Band (Pershing’s Own) from Washington, DC; recipient of the British Columbia Music Educators’ “Honorary Life Award in recognition of a lifetime of commitment of time, talent, and energies to music education in British Columbia.” In 2015 he was inducted as an Honorary Member of the Naden Band of the Royal Canadian Navy “for fostering tremendous goodwill towards the band, heightened morale and esprit de corps, and providing an exceptional liaison between the military and the public.”

Dr. King’s background is varied. Although he is primarily recognized as a conductor of Wind Bands, he is equally comfortable conducting orchestras and choirs. He is a former student of internationally renowned conductor Maestro Kazuyoshi Akiyama with whom he studied the Saito Conducting Technique. His professional career has taken him throughout Canada, the United States, Great Britain, Denmark, Sweden, Holland, Germany, Italy, France, Spain, Japan, Mexico, Hong Kong, Australia, Switzerland, Austria, Slovakia and the Czech Republic.

Dr. King’s conducting appearances with regional, national, international honor, and professional ensembles have been praised for performance quality, artistry, and creativity. Throughout his career he has been a champion of new music, premiering over 30 compositions.  As well, he has worked with over 50 guest artists. In addition to conducting, Dr. King has many years of performing experience as a professional clarinetist, having performed with numerous ensembles, including the La Scala Opera of Milan, Italy during their Canadian tour. During July 2013 he performed with the New Edmonton Wind Sinfonia on their concert tour of Europe — he previously toured with them in 2000 and 2004.

In addition to his passion for making music, he is also widely recognized as an expert for his ability to link theory and practice in the field of teaching and learning. Among his many recordings and publications is a chapter in the book Creativity and Music Education written by 17 authors from the United States, Canada, Israel, Australia, Great Britain, Spain, and Scotland. The book includes a forward by noted author on creativity, Mihalyi Csikszentmihalyi. Dr. King has also completed a well-received DVD — The Craft of Conducting.

Dr. King is in great demand as a conductor, adjudicator, clinician, and keynote speaker. Over the past 25 years he has worked with over 10,000 ensembles and soloists representing more than 500,000 musicians. Dr. King is a Yamaha Artist Educator/Conductor.