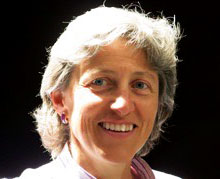 Dr. Gillian MacKay is Professor of Music of the University of Toronto, where she conducts the Wind Ensemble and teaches conducting. An award-winning teacher, Gillian has an active professional career as a conductor, adjudicator, clinician and trumpeter. She has conducted honour ensembles throughout Canada and the United States, and is Associate Conductor of the Denis Wick Canadian Wind Orchestra.

Dr. MacKay has adjudicated Canadian band festivals at local, provincial, and national levels in Canada. She has conducted honour bands and judged competitions in the US, Singapore, Thailand, and Korea.

Dr. MacKay enjoys presenting clinics and workshops at provincial and state conferences in Canada and the United States, and is known for her work on the relationship between conducting and mime. Currently she is engaged in research working to apply the Michael Chekhov acting technique to movement and meaning in conducting. Recognized as a conducting pedagogue, Gillian leads the University of Toronto Wind Conducting Symposium each July, and has been the guest instructor at other symposia in Canada and the United States.