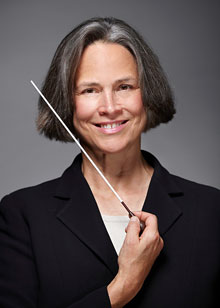 Dr. Elizabeth Jackson Kirchhoff has been active as an instrumental music educator, conductor, and clinician in the United States and Norway for over thirty years.  She completed a Bachelor of Arts in Music Education at St. Olaf College, a Master of Music in Conducting at Northwestern University, and a Ph.D. in Music Education at The Ohio State University.

Jackson currently teaches at Eden Prairie High School in Eden Prairie, Minnesota, where she conducts the Wind Ensemble, the Concert Band and is founder of the EPHS Chamber Winds program. Under Jackson’s direction, the Wind Ensemble was selected to perform at the 2010 Minnesota Music Educators Association Midwinter Clinic and as a featured band at the Music for All National Concert Band Festival in 2001, 2010, and 2014. Prior to her appointment at Eden Prairie, she taught music 5-12 in Wrenshall, Minnesota, band 9-12 at Spring Lake Park High School, and band 5-8 in the Hopkins School District.  Beginning in 2004, she spent a three-year sabbatical as Assistant Professor of Music Education at the University of Minnesota before returning to Eden Prairie High School in the fall of 2007.

Jackson has served as conductor at the 2016 International Music Camp, the 2015 North Dakota Junior High All-State Band, the 2011 Tri-State Middle School Honor Band in Decorah, Iowa, and the 2009 Colorado All-State Concert Band.  She has also served as a clinician at the Virginia Tech Band Directors Institute, the Art of Wind Band Teaching at the University of Minnesota, the MICCA Concert Band Festival in Boston, Massachusetts, the Alaska Music Educators Association state convention, the Ithaca College Northeast Wind Symposium, and the MECA Continuing Education Seminar at the VanderCook College of Music in Chicago, Illinois.