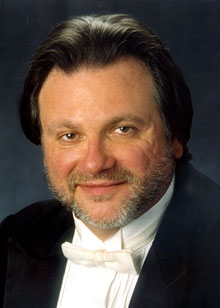 Composers including Karel Husa, David Gillingham, Joseph Turrin, Alvin Curran, Robert Aldridge, and O’Neal Douglas have praised his work. In December of 2010, Dr. McCauley appeared as a clinician in Chicago at the 64th annual Midwest Clinic. He is in demand as a guest conductor, clinician, and adjudicator throughout North America.

Thomas McCauley earned a Doctor of Music degree in conducting from Northwestern University where his primary teacher was Mallory Thompson, and holds a Master and Bachelor’s degree in Music Education from the University of Nevada, Las Vegas. He has been mentored by such notable conductors as Larry Rachleff and Stanley DeRusha.

Ensembles under McCauley’s direction have appeared at national and regional conventions and conferences.  In 1998, he appeared as guest conductor with the renowned Northshore Concert Band on their summer concert series and later appeared as Associate Conductor of the Indianapolis Brass Choir at the 15th International Congress of the International Society for the Investigation and Promotion of Band Music in Lana, Italy in the summer of 2002. From August 2002 to December 2003, Dr. McCauley was also the creator and host of Music Education Matters, a 30-minute radio talk show heard weekly on WICR in Indianapolis.