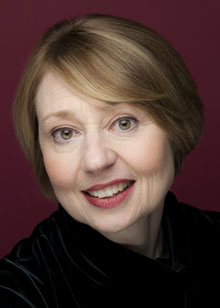 Dr. Hilary Apfelstadt is Professor and Director of Choral Activities at the University of Toronto where she conducts the MacMillan Singers, the Women’s Chamber Choir, and teaches courses in conducting and choral literature. She is also conductor of Exultate Chamber Singers of Toronto.

She has led choral festivals in Europe and at Carnegie Hall and Lincoln Centre in New York. In 2009 she conducted the Mormon Tabernacle Choir in a live broadcast of Music and the Spoken Word. She has directed all-state choruses in more than 30 states and led the 2011 Ontario Youth Choir. She will conduct the National Youth Choir of Canada in 2014.

She is a prolific author, having published multiple articles in professional journals, as well as several chapters in two books: Wisdom, Wit and Will: Women Choral Conductors on their Art (GIA, 2009) and Conducting Women’s Choirs: Strategies for Success (GIA, 2012). Her research interests include repertoire, particularly of Canadian composers, and leadership styles among conductors. She is currently preparing a book on Canadian composer Ruth Watson Henderson. She is a frequent conference presenter and often does conducting master classes at various levels, including some university residencies.

Dr. Apfelstadt was a member of the Robert Shaw Festival Singers and has recorded two Grammy Award-winning CDs with them in France. She is a past national president of ACDA and a current member of the Choral Journal Editorial Board.