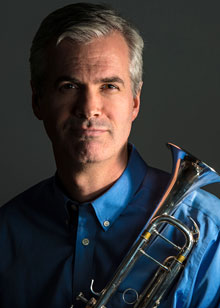 Canadian trumpet player/composer Dean McNeill is a Professor of Brass and Jazz at the University of Saskatchewan. Dean  received a Special Recognition Award from the Saskatchewan Jazz Festival for his contributions to jazz in Saskatchewan. In 2013 he performed Allan Gilliland’s composition Kalla (i.e. classical/jazz crossover piece for solo trumpet and wind ensemble) that won Classical Composition of the Year at the Western Canadian Music Awards.

A Yamaha performing artist, Dean has been recorded on over 20 CDs and as a guest artist performed with professional ensembles such as the Winnipeg, Edmonton, and Vancouver Jazz Orchestras. Dean has adjudicated throughout Canada and the United States and has performed alongside the likes of Hugh Fraser, Tom Banks, Brad Turner, Kelly Jefferson, David Braid, Bob Mintzer, Denzal Sinclaire, PJ Perry, Ingrid Jensen and Jon Balantyne.

A recipient of the U of S Department of Music’s Dwaine Nelson Teaching Award, Dean’s past administrative activities include serving on the board of Jazz Canada; Canadian Music Centre; and as Head of the Department of Music at the University of Saskatchewan.