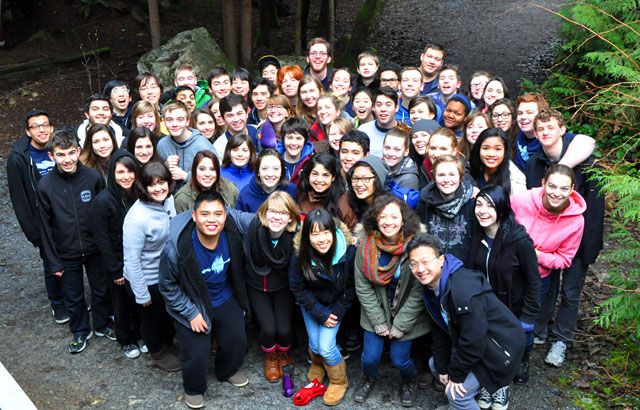 The Coastal Sound Youth Choir has become known in the Canadian choral community for their passionate and imaginative performances. The choir is made up of 65 young people aged 14 to 22, representing over ten different municipalities from across the Metro Vancouver area of British Columbia. Eclectic, heartfelt, creative and full of the energy and determination of youth, Coastal Sound Youth Choir performances have become a destination for music fans across the region.

Coastal Sound has been featured on CBC Radio for their work with their popular Indikör concerts, which bring together the choir with local indie-rock band the Salteens. This spring, Indiekör and Coastal Sound will be the subject of a 30-minute documentary for Telus Optik TV, and in January performed with Woodpigeon and Veda Hille at Vancouver’s PUSH Festival.

Coastal Sound singers love to connect with and learn from other choirs, and over the past few years they have shared the stage with Vancouver Cantata Singers, Elektra Women’s Choir, musica intima, and the Nylons. Repeated award winners at the National Music Festival, this past July Coastal Sound was awarded first place in the youth choir category at the ACCC National Competition for Amateur Choirs, and traveled to Montana to participate in the International Choral Festival. In June of 2013 the choir was chosen, along with Elektra Women’s Choir, to represent Canada at the 2013 Chorus America Conference.

Most importantly, Coastal Sound singers believe that there is “no better way to learn about compassion, humanity, integrity and beauty, than by making music with people you care about.” (Stephanie Browning – Alto 2)

CONDUCTOR: CARRIE TENNANT
Carrie Tennant is the conductor of the Coastal Sound Youth Choir and Associate Artistic Director of the Coastal Sound Music Academy. As a high school teacher, Carrie built a nationally recognized choral program at Maple Ridge Secondary School, and from 2009-2012 she directed the Chor Leoni MYVoice Choir and the Sarah McLachlan Youth Choir. In 2012, Carrie  worked as the assistant conductor to Diane Loomer, and in that role conducted Chor Leoni in several major performances. In January of 2013 Carrie was selected to succeed Diane as Artistic Director of EnChor. Currently, Carrie is the founder and Artistic Director of the Vancouver Youth Choir – the  region’s newest choir for singers 14–21.

Carrie sits on the board of the BC Choral Federation, is an Artist-in-Residence with the Vancouver School Board, and  is a frequent clinician, adjudicator and retreat facilitator across Canada. A passionate advocate for building and sustaining community among BC choirs and conductors, in 2010 she helped found the “BC Choral Mentorship Project”: a collective that brings together expert speakers/conductors with choral directors for master classes, discussion groups and lectures.