« back to Festival Concerts 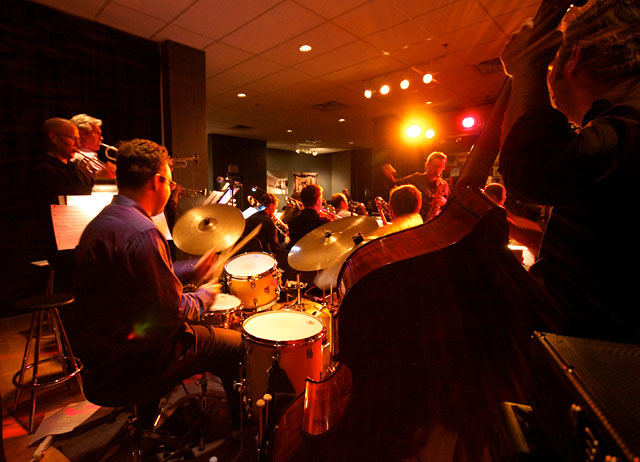 The Calgary Creative Arts Ensemble is Calgary’s newest big band. Co-led by saxophonist Mark DeJong and drummer Jon McCaslin, the CCAE brings together 17 of western Canada’s finest musicians to collaborate with local, national and international performers and composers. Chosen by the Calgary 2012 committee to be included in the inaugural InvestYYC program, the CCAE brings exciting and dynamic new music to Calgary audiences.

Mark DeJong is active as a performer, educator, composer and bandleader. A graduate of the University of Calgary, he also holds a Master’s degree in Jazz Studies from Rutgers University. He teaches jazz at Mt. Royal University, directs the TD Jazz Intensive in Saskatoon, SK, and is the co-director of the JazzYYC Youth Lab Band. He is a founding member of the New York-based group the Outer Bridge Ensemble, with whom he made his debut at the Blue Note (NY) in March of 2014. The Outer Bridge has opened for such luminaries as John Scofield, Christian McBride and Kenny Werner. Marks WCMA-nominated CD The Unknown garnered praise from around the globe. His recent recording, Where Everything is Music, features Juno Award-winning pianist David Braid and renowned bassist and cellist Simon Fisk. He has toured internationally including Europe, Japan, Cuba, and in 2010 was a featured soloist at World Expo in Shanghai, China. He has shared the stage with such international icons as Ray Charles, Lennie Pickett, Rob McConnell, Kenny Wheeler, Moe Koffman, David Braid, Hugh Fraser and Oliver Jones, as well as vocalists Nikki Yanofsky, Denzal Sinclaire and Carol Wellsman.