Brad Turner’s phenomenal talents as a trumpeter, pianist, drummer and composer make him one of Canada’s most in-demand and highly esteemed musicians. 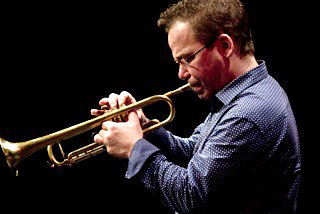 In 1997 and 1998 Brad won Juno Awards for Best Contemporary Jazz Album recognizing his work in the internationally acclaimed electric jazz group Metalwood. Winner of National Jazz Awards for Jazz Composer of the Year (2000 and 2002), Brad was awarded Musician of the Year for 2005, and was a recipient of 2006 Victor Lynch-Staunton Prize for excellence in musical achievement.

In 2008 and again in 2009, Brad took home National Jazz Awards for Trumpeter of the Year and Producer of the year, and was the recipient of the 2014 Vancouver Mayor’s Art Award for music.

Brad is a member of the jazz studies faculty at Capilano University in North Vancouver, B.C., and plays Cannonball trumpets.