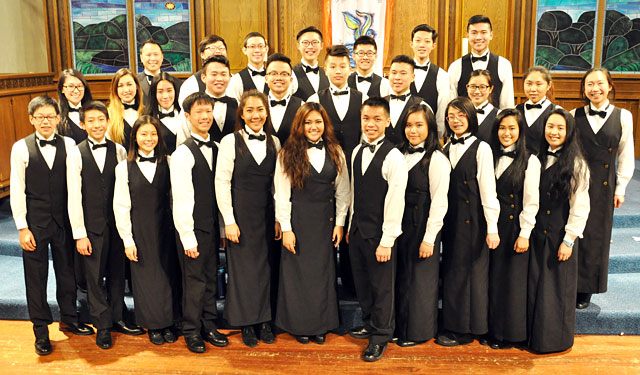 The Magee Chamber Choir is one of five choirs at Magee Secondary School in Vancouver, .BC. This auditioned ensemble, composed of senior level students, is dedicated to creating music at a very high level of choral artistry in a variety of styles and genres.

In addition to being in the Chamber Choir, each member of the group is involved in at least three other ensembles, including the 130-voice Concert Choir, a small vocal ensemble, and either a men’s or ladies’ ensemble, all directed by Mr. Greg Quan. Some members are also involved with our large band program, directed by Mr. Chris Haas, and/or our orchestra program, also directed by Mr. Quan.

They performed twice in Robson Square for the Vancouver 2010 Winter Olympics and also in the televised Opening Ceremonies of the 2010 Paralympics. They have toured Europe, Russia, and Japan.

They were declared the 2015 provincial champions [#1 school choir under the age of 19]. The choir has produced and released 4 CDs; Illumina, For the Beauty, Alleluia, and Sing We Now of Christmas.