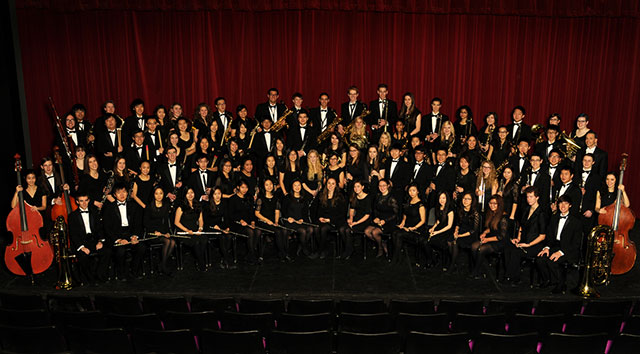 Western Canada High School has a tradition of excellence in the offering of its instrumental music programs. We are proud to say that annually we have over 275 students who enrol in our instrumental music program and perform as proud members of the Western Canada High School Band Program. Within our program we have three preforming concert bands: the Grade 10 Concert Band, the Grade 11 Symphonic Band and the Grade 12 Wind Ensemble. Each ensemble is a featured performance ensemble open to students with previous experience in instrumental music. The band program courses exist as co-curricular to complement our outstanding academic and other co-curricular and extra-curricular programs.

Yearly students in the band program work extensively with professional musicians from across North America to build on their individual musical skill set. In addition the various ensembles in the Band Program partake in fall band camps to Banff and Caroline, AB and participate in an annual spring music tour across North America. Our band and choral programs have the outstanding opportunity to perform our annual winter and year-end concerts at the Jack Singer Concert Hall which is a world-class performance venue.

Over the past two and a half years, the Grade 12 Wind Ensemble has performed at the Alberta International Band Festival, The Alberta Band Association Festival of Bands and performed a Canadian premiere by composer Julie Giroux with the composer in attendance. They have travelled to Chicago, Illinois where they workshopped with conductors from Northwestern University and Vandercook College of Music. The ensemble competed in the World Strides Festival where they placed First in their division.